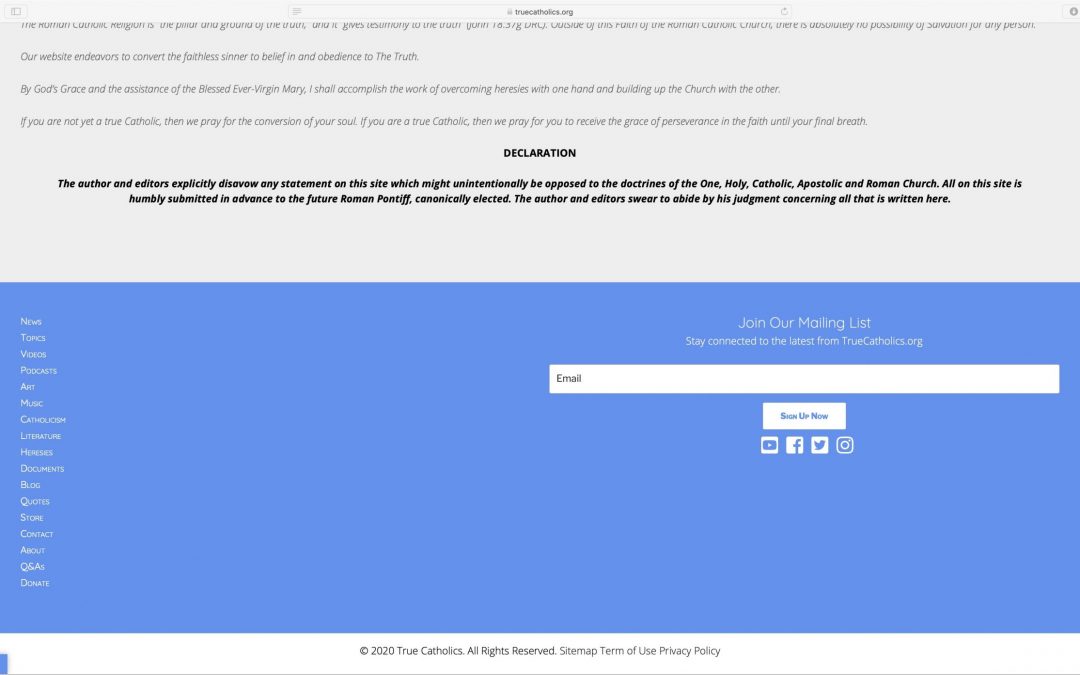 + Seven Holy Founders of the Servites +

I recently have received inquiries from readers about the “stay-at-home Catholics” site truecatholics.org. I also have been harassed over the past few months by two individuals, one of them a Feeneyite, disputing various topics covered on betrayedcatholics. These attacks may or may not be related, but often they precede the appearance of wannabe sites or publications claiming to be Catholic.

Before beginning, it will be useful to point out the teaching of Pope St. Pius X in Pascendi Dominici Gregis: “They put their designs for Her [the Church’s] ruin into operation not from without, but from within… The more intimate their knowledge of Her, the more certain the injury.” This can describe Traditionalists of all shades, including the Feeneyites, and some Feeneyites style themselves as “stay-at-home Catholics.” They present with all the external trappings of the Church and nearly all Her teachings, save the one drop of heretical poison here and there that sends souls to hell. They are convinced, of course, that their heresies are actually true teachings of Christ’s Church on earth, as are all heretics. This is especially true of the Feeneyites, who never cease to fiercely defend their errors.

Any stay-at-home minded Catholic pulling up the trueCatholics site would immediately presume they have found like-minded faithful, based on the appearance of its content. All has been designed to attract those searching for answers, with several media options avaialble. An “easy way” to understand what has happened to the Church is offered in short articles that use the “just listen to me” method to present truths of faith. But like so many sites, bite a little deeper into the apple and the worm surfaces. During a brief search of the trueCatholics site, the following heretical statements were discovered:

“Water baptism only forgives sins — There is no forgiveness of sins and hence no possibility of salvation without a correct and proper Baptism of Water and a correct and proper Profession of Faith” (https://truecatholics.org/catholicism/baptism-is-necessary-for-salvation/).

“There is no such thing as Invincible ignorance — Ignorance has never been a means of salvation. (Fr. Goffine, 1687) Today, there are many wicked heresies like invincible ignorance, which have fooled people into believing ideas condemned by Christ and His Catholic Church. They cause unthinking, deceived people to fall into heresy and fall outside the pale of the Church. No heretic shall be worthy of eternal life.” Pope Eugene IV, ex Cathedra, Cantate domino, 1441.

“Heretics won’t go to heaven — It is true. Heretics cannot go to heaven. This is Church dogma. Council of Florence, Pope Eugene IV, ex Cathedra, Cantate domino, 1441: “The Most Holy Roman Church firmly believes, professes and preaches that none of those existing outside the Catholic Church, not only pagans, but also Jews, and heretics, and schismatics, can ever be partakers of eternal life, but that they are to go into the eternal fire “which was prepared for the devil, and his angels,” (Mt. 25:41) unless before death they are joined with Her…”

To find the true teachings of the popes on the above subjects, go to https://www.betrayedcatholics.com/the-saved-and-the-lost-some-points-to-consider/ Baptism of blood and desire are treated in an article available from the Archives and two articles listed under recent articles on the Articles page. The fact that this teaching is not readily apparent and openly stated at the outset on trueCatholics shows that the creators of the site hope to lure in younger Catholics not familiar with some of these longstanding issues with Feeneyites. This way they can redirect them from sites that are truly written for stay-at-home — Catacomb — Catholics while pretending to be in agreement with them, constituting one, big happy family.

After all, many of the quotes and the premises used on betrayedcatholics can be found embedded in the writings on the trueCatholics site in order to make it appear they are on the same page with us. While quotes cannot be copyrighted, they can be considered ingredients of intellectual property when used to construct demonstrations according to the Scholastic method of presentation required by the Church. This is especially true when the books these quotes are taken from cannot be found available for sale or download on the Internet. I have a 4,000-volume library in my home and many of these books are out of print or considered rare. I doubt there are many copies floating around. These erudite Catholics also “borrowed” a declaration from my website which has appeared here since 2003. It also can be found in the opening pages of my first self-published work Will the Catholic Church Survive…? written 30 years ago. Here is the declaration as found on their site: 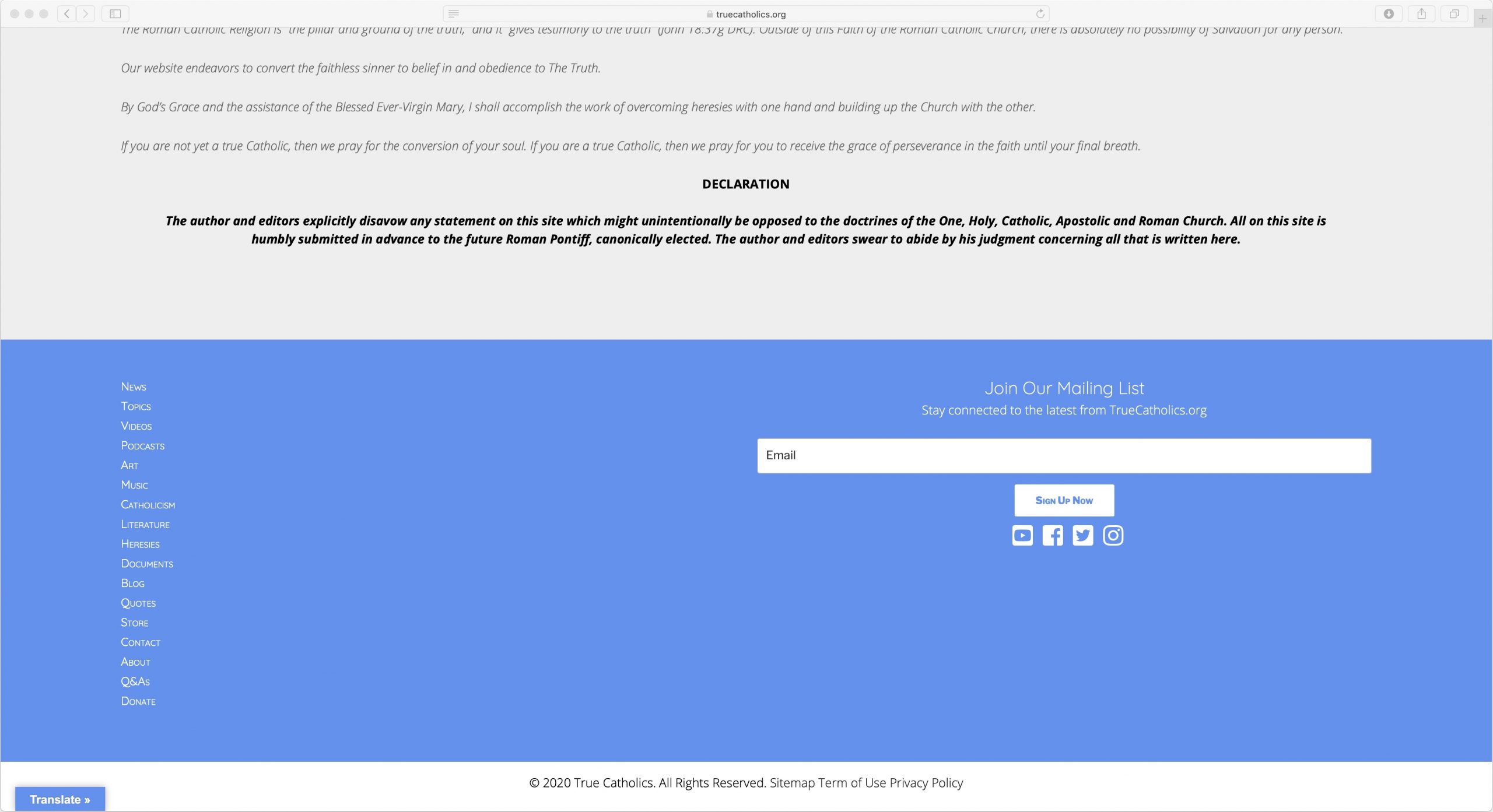 Anyone can rewrite something they would like to use or ask for permission to use it; that is what professional journalists do. But that aside, what kind of Catholic does not give credit to those who went before him or her in the field of Catholic truth, especially when they are so bold as to accommodate the hard-won fruits of their literary labor?! The trueCatholics site does not once mention betrayedCatholics, and that is not only dishonest, it is also not Catholic. When any scholar or theologian creates a work based on another work, those works are always listed in either footnotes or the bibliography. Not to use the Scholastic method to present truths of faith is to ignore the Church’s orders to do so and to set oneself up as sole authority in matters of faith.

In his comments about these teachings regarding salvation, Msgr. Joseph C. Fenton tells us in his work The Catholic Church and Salvation that Pope Pius XII’s decree against the Feeneyites, Suprema haec sacra “is an authoritative, though obviously not an infallible, document. That is to say, the teachings contained in the Suprema haec sacra are not to be accepted as infallibly true on the authority of this particular document. Nevertheless, the fact remains that much of its teaching — Indeed, what we may call the substance of its teaching — is material which has appeared in previous documents emanating from the Sovereign Pontiff himself and from Oecumenical Councils of the Catholic Church… [However] the Cardinals of the Supreme Sacred Congregation of the Holy Office decreed that these explanations be given, and the Holy Father approved their decision. We are dealing, then, with an authoritative document. It would be wrong for any teacher of Catholic doctrine to ignore or to contradict the teachings contained in this Holy Office letter” (see https://www.betrayedcatholics.com/the-sincere-internal-assent-catholics-owe-papal-pronouncements/). So why are trueCatholics teaching otherwise?

Here there is no denial by Pope Pius XII, but only confirmation, of “outside the Church no salvation.” Fenton writes: “That there is no salvation outside the Catholic Church is a doctrine ‘which the Church has always preached and will never cease to preach’ …as an ‘infallible statement.’ This states clearly that it is a dogma — in other words, one of the teachings which the Church finds in Scripture or in divine apostolic tradition, and which, by either solemn judgment or in its ordinary and universal teaching activity, it presents to the people as something they must believe as a part of divine public revelation… [But] it is to be noted that this conclusion is the practical expression of the meaning of the Church’s necessity of precept. It very definitely is not, either in itself or in its context in in the Suprema haec sacra, an expression of the complete and ultimate meaning of the dogma of the necessity of the Church for salvation.

“The Suprema haec sacra shows that the text of the Mystici Corporis, particularly those sections of the encyclical mentioned in the Holy Office letter, reproves two mutually opposed errors. The first error condemned in the Mystici Corporis is that according to which a man who has merely an implicit desire of entering the Catholic Church is in a situation in which it is impossible for him to attain to his eternal salvation. The second error proscribed is that which holds that men can be saved equally in every religion. Those who taught either error after the publication of Mystici Corporis were guilty of ignoring or defying the authority of the Sovereign Pontiff, teaching in his ordinary doctrinal activity or magisterium” (end of Msgr. Fenton quotes). Therefore, this is the case with the Feeneyites, who cannot accept the fact that certain individuals, (known only to God Himself, Pope Pius IX teaches), can be saved according to the necessity of means. And this, Pope Pius IX also teaches, can happen by way of invincible ignorance. So regardless of whether Suprema haec sacra is infallible, the Feeneyites are denying the teachings of the ordinary magisterium and defying the authority of the popes, just as their founder Leonard Feeney did. And it must be remembered that Feeney was excommunicated from the Church for his defiance.

As has been stated elsewhere, no one is certain of their eternal salvation, and this applies to stay-at-home Catholics. We most fervently wish to be numbered among the elect and are doing everything in our power to see that is the case. But we definitely do believe others can be saved by explicit or implicit desire, because to believe otherwise would be a denial of papal teaching and authority. This was explained in The Saved and the Lost blog post.

One more point needs to be made here. Any group or individual ignoring other existing stay-at-home Catholics then using their premises for one’s own purposes should send up a red flag. It should tell those reading the material on such sites that the only reason the site’s authors would have for ignoring fellow Catholics is if they did not agree with them on some important Catholic doctrine. It is Traditionalists who seek to burrow in and disguise their true intentions only to lead others away from already existing groups. These are the tactics of Protestant sects, not Catholics. As Fr. Demaris tells us in They Have Taken Away My Lord… “It is by faith that the faithful are united… Truth wins, no matter how small the number of those attached to our Lord.” If we have not the faith, whole and entire, we have nothing.