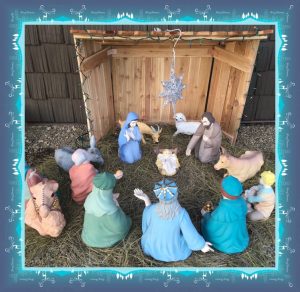 The following is a true story from my Catholic grade school days. Three grades in one room adjacent to a tiny clapboard church served our rural parish very well. A better education could not have been hoped for from the Sisters of St. Joseph and their helpers. A version of this story first appeared in a Traditional publication in December 1979.

Thank you to everyone who has supported this site and for all the much- appreciated donations. You are always in my prayers. Every penny is used for site and computer maintenance.

Wishing you all a peaceful and blessed ChristMass and a holy New Year.

Only children can endow the celebration of Our Lord’s birth with the spirit of wonder and awe that the shepherds must have experienced when they first viewed the star and followed it to the stable. But since the advent of television, the Internet and cell phones Christmas has become less a religious feast day and more and more akin to the Druid holiday of Solstice it was intended to replace. This was true when I was a child, and one Christmas especially comes to mind . . .

I must have been eight or nine that year, old enough to have discarded my notions of how toys made it to our house on Christmas morning, yet still young enough to be hypnotized by the glamour and the glitter of it all. Construction paper chains hung in the hall, aluminum foil stars twinkled from the tops of evergreen and pine trees in each classroom, and Nativity artwork hung everywhere. My best friend Mary Lee and I exchanged snowflake cutouts when Sister wasn’t looking. Mary Lee’s Christmas list was very short and to the point. Coming from a large farm family, she took a realistic point of view, gearing her expectations to the meager family budget. I was sorry for her, but happy for me. My parents weren’t rich, in fact it was a struggle for them just to make ends meet. But somehow, quite magically, our Christmases were always bountiful, even though I had four brothers and sisters. But that year Mary Lee was more excited about giving than getting.

Shortly after Thanksgiving Father Hogan announced that that there would be a special contest held for grades three through eight. We would each try to build a Nativity scene, with no help from our parents, and using materials available in the home whenever possible. It had been three weeks since Father had announced the contest, and Mary Lee gave daily reports on the nightly after chores progress made on the stable construction by an older brother and sister from the upper grades and herself. The prize was a lovely statue of Our Lady, and Mary Lee had her heart set on winning it for her mother. I had similar designs on that statue, and I was determined that my manger scene would be the finest entry of all.

I had seen some brightly-colored plastic statues in the town department store, and I knew that if I could just buy them somehow, my nativity scene would look almost as professional as the ones in the mail order catalogue Mother kept hidden on the closet shelf. So I managed to talk my parents into an advance on my Christmas money, and away I flew to the department store. Besides the Holy Family, I needed animals for the stable, at least two shepherds, and an angel for the rooftop. Once the statues were bought, I needed to concentrate on building the stable itself. After a few clumsy attempts with a hammer and some masonite, my father suggested I use glue and masking tape rather than nails.

It worked like a charm, and in no time at all the little building was ready for its occupants. With the statues glued in place, and my angel with glad tidings pinned securely to the roof, I made a quick trip across the street to a vacant lot for the finishing touch. When all the work was completed, I viewed the finished product. I was excited. It did look like the catalogue pictures; the hay stubble from the vacant lot that I had strewn on the stable floor and the roof had lent just the right look to it all. I carried it proudly to school the next day, and Sister placed it in the empty storeroom next door to pass the time, unseen, until all the entries could be judged. But before Sister had wrested it from my grimy little hands, I had quickly shown it to Mary Lee. She dutifully admired it and wished me luck, but I couldn’t help notice her crestfallen look.

The last week of school before Christmas vacation seemed like months to me. But finally all the carols were sung, all the Christmas cookies eaten, and the class gift exchange accomplished. Carefully tucking gilt-edged holy cards from Sister into our prayer books, the last day finally came to a close, and with shouts of “Merry Christmas” we made our separate ways home. I wore my best dress that night, and my party shoes. My parents had to repeatedly remind me to calm down, but finally dinner was over and our family in the car and on its way to what I felt certain would be a victory celebration.

I fidgeted during the upper grades play, and all through the carols sung by the first and second graders. I couldn’t even bring myself to eat any of the refreshments served afterwards. My eyes were riveted to Father who was slowly making his way through the throng bestowing Christmas blessings. At long last, I spotted him making his way to the stage. He instructed parents and children to follow him to the school where he would judge the nativity scene contest. I walked to the small school with my parents, my heart pounding. The little storeroom was tidy, and resplendent with decorations placed carefully around each contest entry.

Father solemnly examined each one, murmuring compliments from time to time. Finally he picked up a manger scene and presented it to the crowd. I couldn’t believe my eyes. Father had chosen the least attractive entry of all. The stable was made from plain gray cardboard, the figures from homemade clay. Remnants of material served for clothes, and excelsior was spread patchily over the whole affair. Suddenly I saw Mary Lee’s family speaking to Father. Their faces shone as Father congratulated them. Resentment roiled up in me for Mary Lee. Father stepped forward and motioned to the crowd for silence.

“I have chosen this entry,” he began, “because to me it best illustrates the spirit of Christmas. Our Lord was born in mean and humble circumstances. His parents were not well dressed; they wore simple quiet-colored clothing. Their Child was swaddled in coarse linen, bedded in rough straw. Lowly shepherds, clothed in animal skins came to worship Him. To rightly celebrate His birth, I believe Our Lord would have us cast off the outer man and rejoice in His birth from our hearts. Our bodies can be swathed in the latest and gayest of fashions, while our souls lie in rags. May God bless you this Christmas and always.”

I was ashamed. The pleasing colors of the plastic statues had attracted me. Their shining perfection had helped me to forget that the state of a man’s soul and what is in his heart; the honest work from his own hands and not the fit of his clothes are the things that commend him to God. I had bought the statues, not formed them by hand as Mary Lee had helped to do. I had sought the smooth masonite for my stable, forgetting that the first stable had not been polished and comely, but only a crude shelter for animals. I remembered hearing how the Chosen People had expected a Messiah of noble birth, a bejeweled king come to deliver them from their Roman oppressors. And it was then that I realized I had forgotten the true meaning of Christmas.

I looked around to see Mary Lee standing shyly by my side. “I’m sorry I won and you didn’t,” she whispered. Sympathy shone in her eyes. Impulsively, I hugged her. “I’m just glad you won,” I told her. And I really meant it.