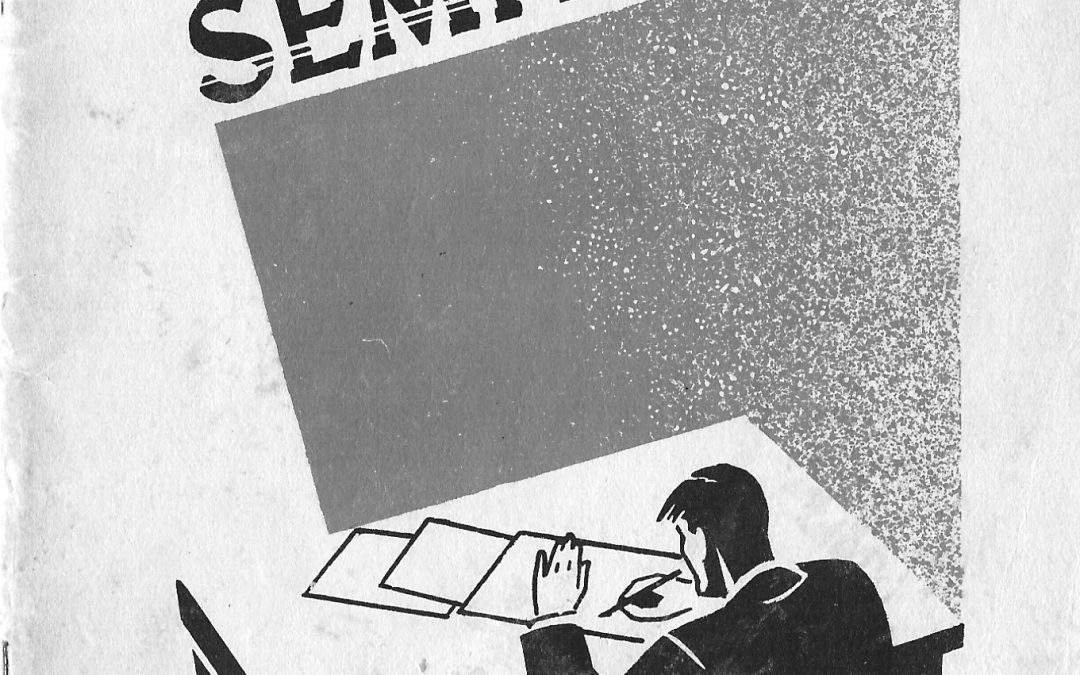 A reader identified only as “anonymous” has leveled a charge that the last published blog could be taken as defamation against Traditionalists. I have no obligation whatsoever to address anything coming to me anonymously; newspapers will not even publish anonymous letters to the editor. But to set the record straight and be totally transparent myself, I think it is important to make some distinctions as suggested by this person below.

Define what you mean by the terms “anti-semite,” “Neo-Nazi,” and “white supremacist.”

Do not take me to task for definitions regarding anti-Semitism. The definitions of the terms used in the last blog on John 23 as the founder of Traditionalism are in total keeping with the Church’s own definitions on this topic. If you are going to accuse someone of defamation, get your facts straight. I am not the one who defined those terms, at least the term anti-Semitic; it was Pope Pius XI (see below). The other two terms can be taken from their current obvious meaning. Neo-Nazi means the new Nazis, those professing Nazi or fascist beliefs or sympathies post World War II. White supremacy, which resurged in the US in the 1950s-60s, is simply a term that grew out of that movement. It is usually associated with the “White Power” movement — the KKK, various neo-Nazi organizations, and the religious Christian Identity groups. Some of these sects have reportedly aligned themselves with Islamic groups. The Christian Identity groups are those most likely, in my opinion to be “skinheads,” or Aryan Nation types.

Perhaps you would like to define the word Catholic for me. Sorry, but I do not consider Traditionalists as Catholic – anyone seriously studying this site knows that. They also should know that the only definitions I hold are those provided by approved authors, the teachings of the Roman Pontiffs and the ecumenical councils, also Canon Law. I have never said Traditionalists planned to slaughter Jews, although I do know many blame them for the destruction of the Church. They thereby justify any ill-feeling this generates as a defense of the faith, and if taken to extremes I am simply warning this could be dangerous and is indeed dangerous given the present state of affairs. I simply quoted a source that merely warned of this alarming trend among Traditionalists, written three decades ago. This is confirmed by my own personal experience, on many different occasions, of this very phenomenon over the past 40 years. I can easily support this with existing evidence.

Maybe you should read what Coughlin wrote and what Traditionalists read and believe and answer that question for yourself. Coughlin was brought up short and silenced by no less than the future Pope Pius XII, and after Pacelli’s election Coughlin accused him of favoring Communism. One biographer writing about Coughlin called Henry Ford “a very close friend” of Coughlin’s, and Ford received one of the highest military honors in Germany from Hitler himself. Coughlin was accused of siding with the Germans in one of his radio speeches because he excused them for their sanctions against the Jews (in 1938, before World War II broke out), arguing they were necessary to combat supposed Communism in Germany, which many believed the Jews helped engineer.

Ford also was an open proponent of British Israelism. According to Wikipedia and as evidenced by Ford’s own work, The International Jew, William J. Cameron (1878–1955), publicist for Henry Ford, advocated British Israelism in Ford-sponsored publications. British Israelism is listed on Lady Queensborough’s Masonic pyramid as a lower level of Masonic initiation. So was Coughlin not only anti-Jew but also a Masonic sympathizer? Read the historic works my friend and stop making such foolish comments! The evidence is there. Even Catholics at the time were critical of Coughlin and interpreted his stance as anti-Semitic, and certainly Ford was a known anti-Semite. Was Coughlin agitating for the extermination of the Jews? Certainly not. But he was accused of fomenting unrest and dislike, even hatred for them, in his speeches.

Now we come to the beliefs of Traditionalists, the ones who for decades have used The Plot Against the Church by Maurice Pinay as practically the founding document of their movement. This book has been promoted by Traditionalists on the web since the 1990s but has been pulled from some sites because of the recent political climate. It is available on many different platforms today. If you want to read a work that could be classified as anti-Semitic work, read that book. Then compare it to what Pope Pius XI describes below as the definition of anti-Semitism. I am not going to engage in a semantic war with you over the definition of the word hate, which Pius XI mentions. This word appears in Webster’s Collegiate Dictionary, Seventh Edition, issued in 1934 as follows: “To feel an intense aversion to; to detest or abhor.” And under hatred: “Strong aversion or detestation coupled with ill will.” This makes it contemporaneous with Pius XI’s use of this word. Notice there is no reference whatsoever to potential murder, nor did I intend to ever suggest that this was the case. I challenge you to point to one thing in that blog that would lead anyone to believe this is what I was suggesting. The death factor came to be identified with the anti-Semitism term after Hitler’s “final solution.”

All I was attempting to point out is exactly what other Catholic writers pointed out to Fr. Coughlin in the 1930s: aligning oneself with these openly anti-Jewish groups can rile more volatile types among Catholics to violence. But while many hated the Jews and still do, unfortunately, this does not mean the majority entertain homicidal tendencies toward them; only this more easily agitated minority. Most Catholics may want the openly anti-Christian sects among them suppressed, yes, and wish for the conversion of all Jews; but they do not want them imprisoned or murdered. No true Catholic could ever promote such a thing. What I referred to in my article that is driving Traditionalists underground is their association with those known white supremacist (Christian identity) groups now classified as domestic terrorists. That is a real concern, but they should not pretend that in going underground “into the catacombs” it is because of their Catholic faith, because they are not truly Catholic. On the contrary, it is because they are aligning themselves with an heretical group known to be Masonic that they fear retribution. And that is quite a different scenario.

Not so voluminous as you pretend. I commented on this claim in a previous article at https://www.betrayedcatholics.com/what-the-popes-teach-about-the-jews/  Yes, a good number of popes condemned Jewish incursions into the Church and their efforts to subjugate Catholics, as they were bound to do. The majority of them, however, remained silent on this topic. If you want a true Catholic definition of anti-Semitism, here is Pope Pius XI’s teaching on this subject, taken form the booklet below, written in 1944, by an approved Catholic author: 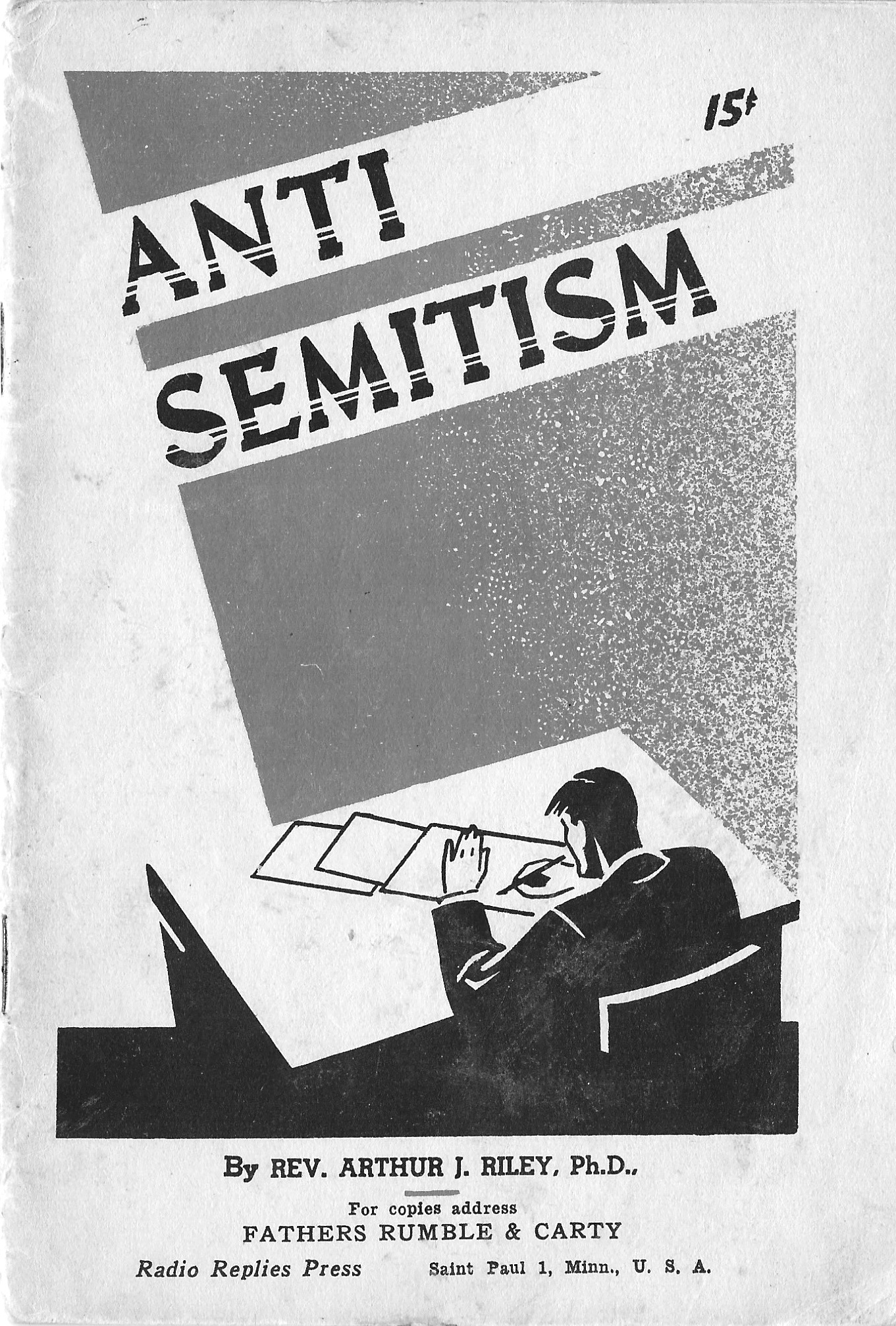 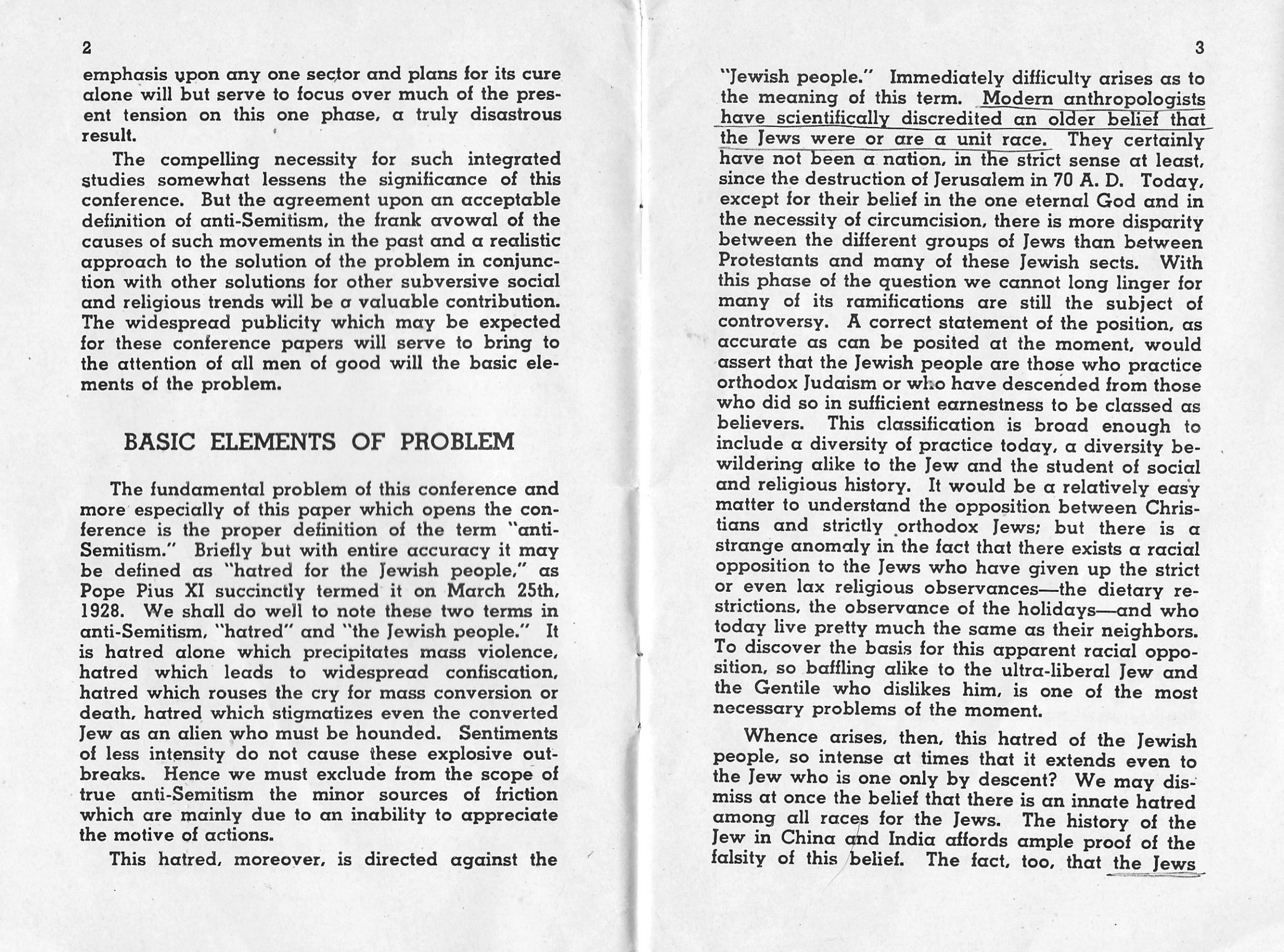 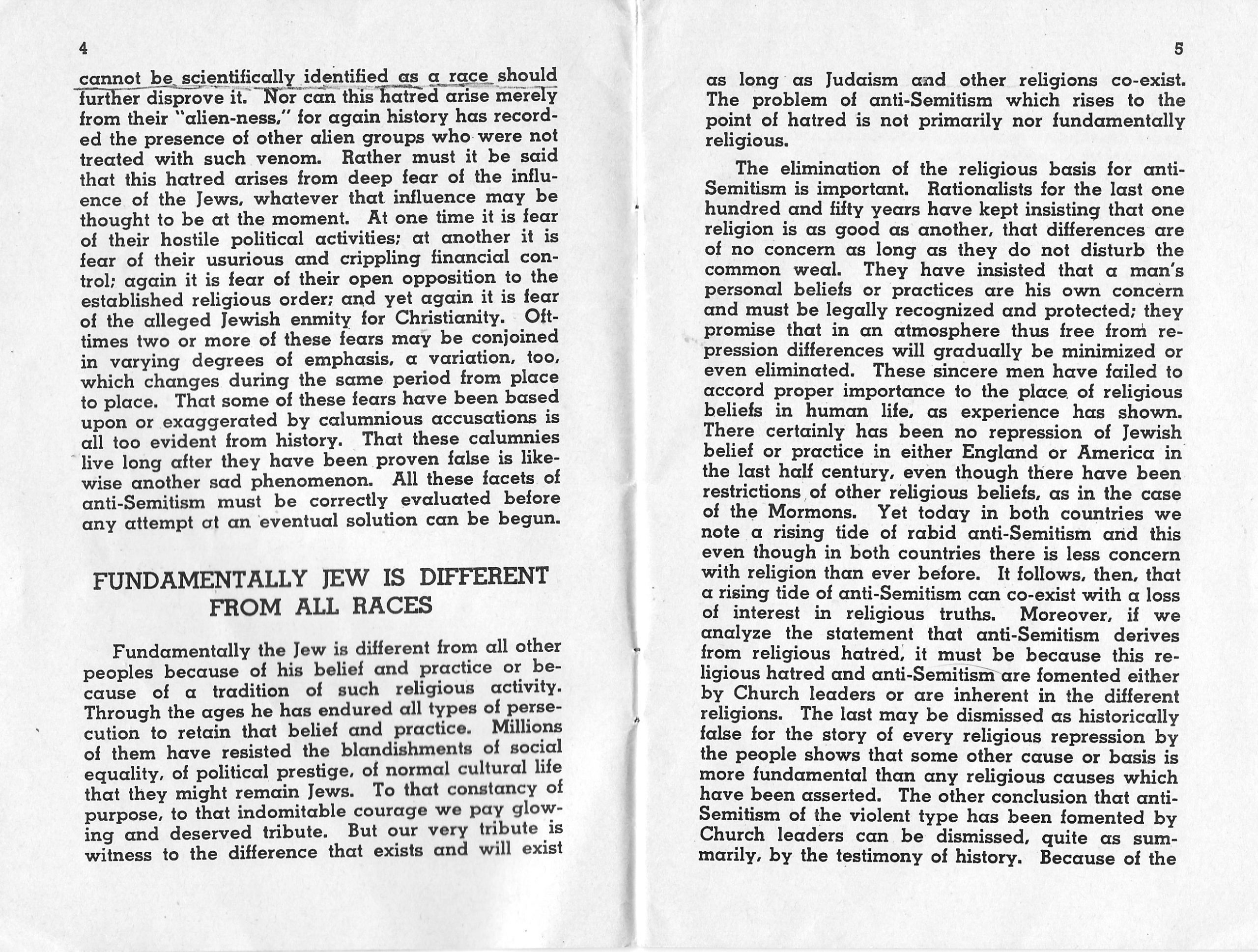 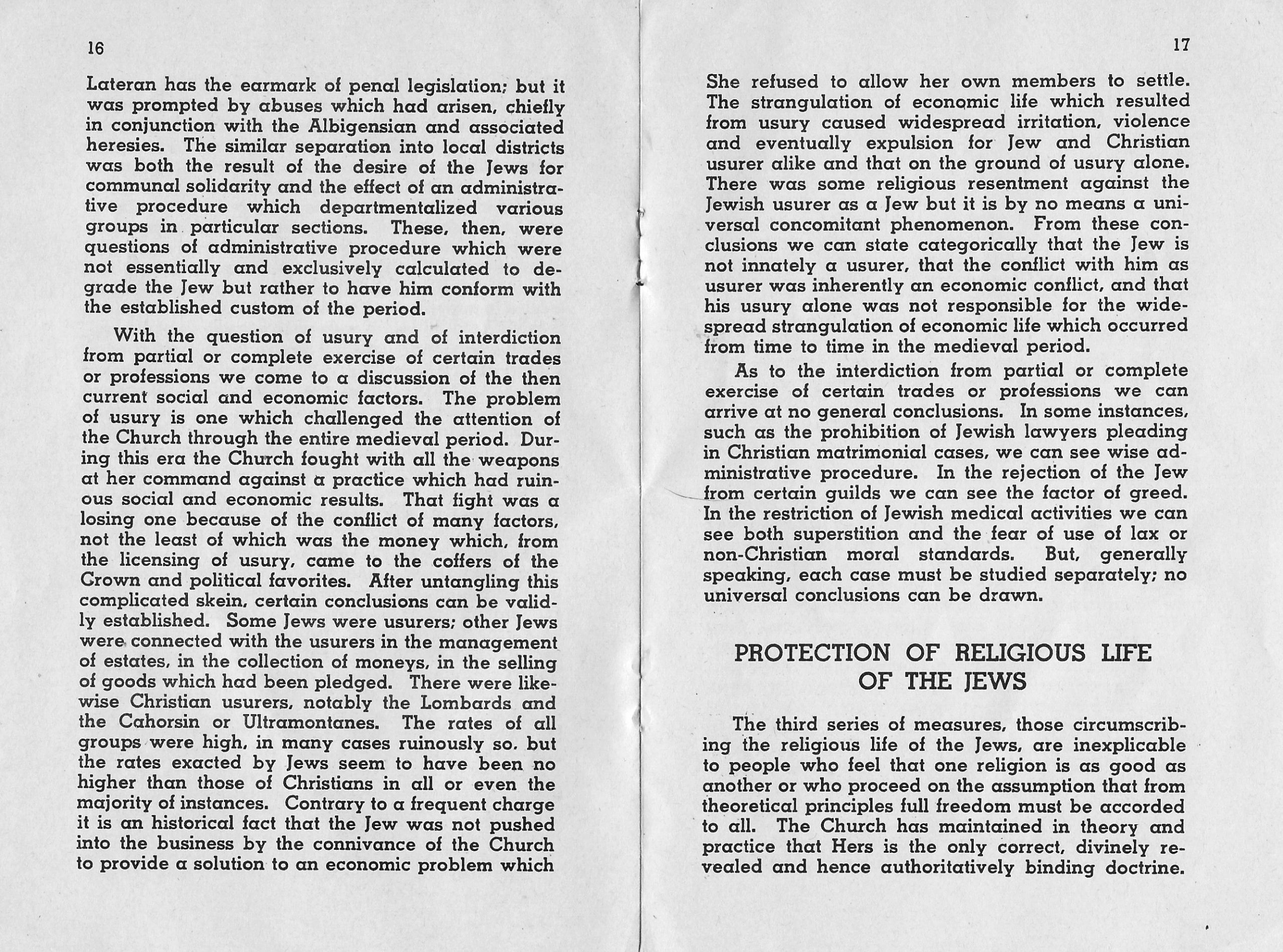 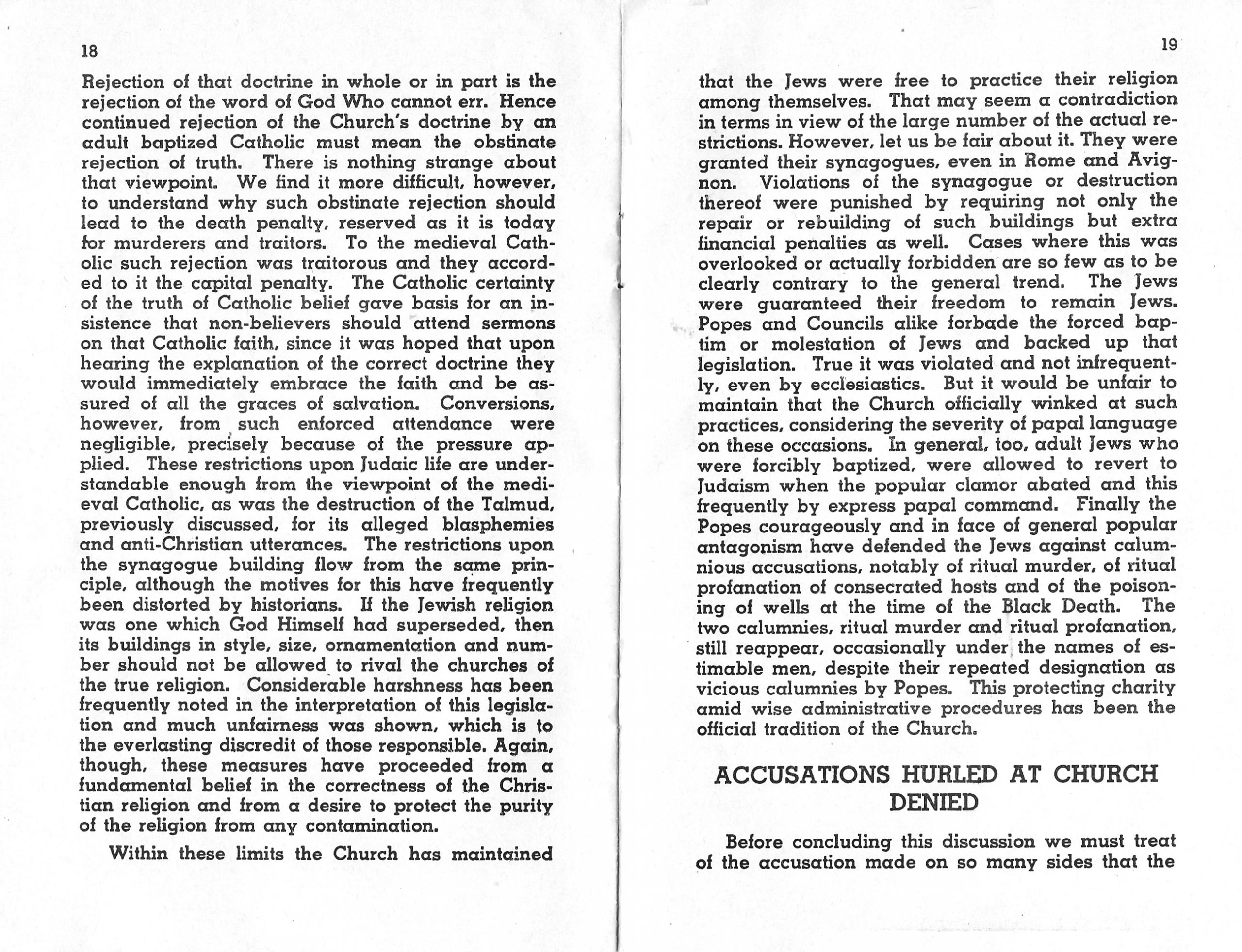 This is what the Church teaches on anti-Semitism and how she defines it. If anyone would like a copy of the entire booklet, I would be happy to provide it. Yes, those who call for mass conversion or death may have been included in this definition of hatred, The popes, however, forbade forced baptism of the Jews. And no rightly believing stay-at-home Catholic today calls for such conversion. How would such mass conversion even be possible today? Without the visible Church to accept such converts there is nothing to convert to!