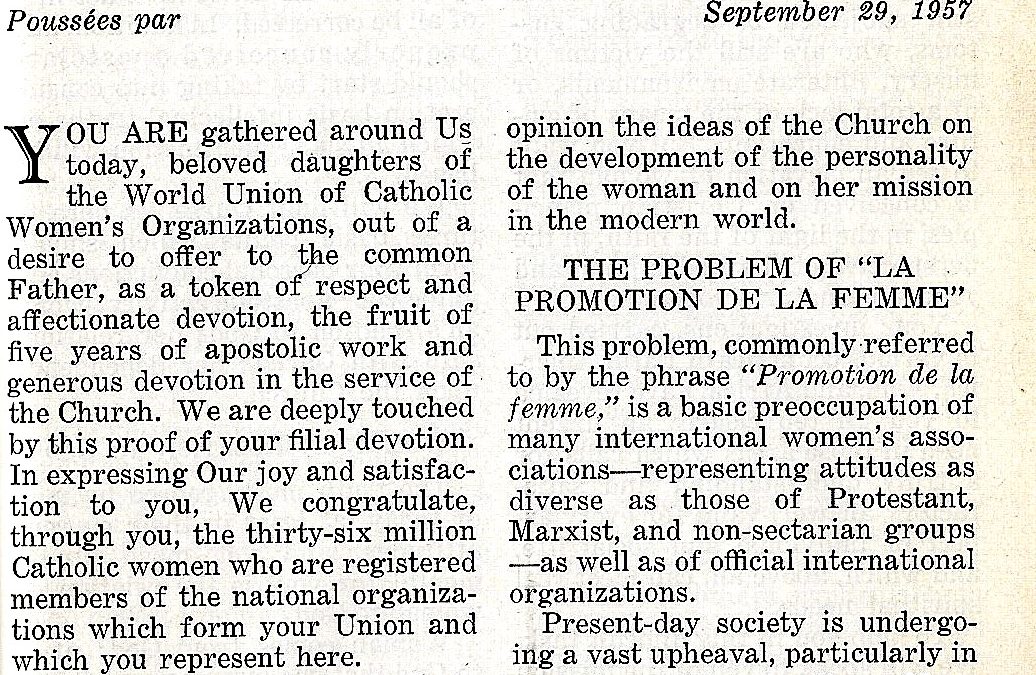 The infantile pratings of Traditionalists admonishing women to be silent in Church as St. Paul teaches in I Cor. 14:34 (and silent everywhere else as well, it seems) give no context to this use of Scripture and only belies their basic ignorance of the Church’s true position on this subject. So in order to refute these errors regarding the Church’s stand on women and the role they must play in defending the faith, the following teaching of TRUE Church authorities, not self-appointed Traditionalist popes, should be observed. From the Catholic Encyclopedia:

“The Catholic Church has made no doctrinal pronouncement on the question of women’s rights in the present meaning of that term. It has from the beginning vindicated the dignity of womanhood and declared that in spiritual matters man and woman are equal, according to the words of St. Paul: “There is neither male nor female, for you are all one in Christ Jesus” (Galatians 3:28). The Church has also jealously guarded the sanctity of home life, now so disastrously infringed by the divorce evil, and while upholding the husband’s headship of the family has also vindicated the position of the mother and wife in the household. Where family rights and duties and womanly dignity are not violated in other fields of action, the Church opposes no barrier to woman’s progress.

“Although women are not capable of receiving the power of sacred orders, yet they are capable of some power of jurisdiction. If a female, therefore, succeeds to some office or dignity which has some jurisdiction annexed to it, although she cannot undertake the cure of souls, yet she becomes capable of exercising the jurisdiction herself and of committing the care of souls to a cleric who can lawfully undertake it, and she can confer the benefice upon him (cap. Dilecta, de major. et obed.). Abbesses and prioresses, consequently, who have acquired such jurisdiction can exercise the rights of patronage in a parochial church and nominate and install as parish priest the candidate whom the diocesan bishop has approved for the cure of souls (S.C.C., 17 Dec., 1701). Such female patron can also, in virtue of her jurisdiction, deprive clerics subject to her of the benefices she had conferred upon them, by withdrawing the title and possession.” This is chronicled also by Regine Pernoud in her Women in the Days of the Cathedrals.

The most recent teachings on this subject however, come to us from the pen of Pope Pius XII in 1957. And it most specifically mentions the role of women in teaching the faith, and how they are to conduct themselves in this regard. Owing to the length of his address, only the following excerpts have been selected form the 197-58 editor of  The Pope Speaks. 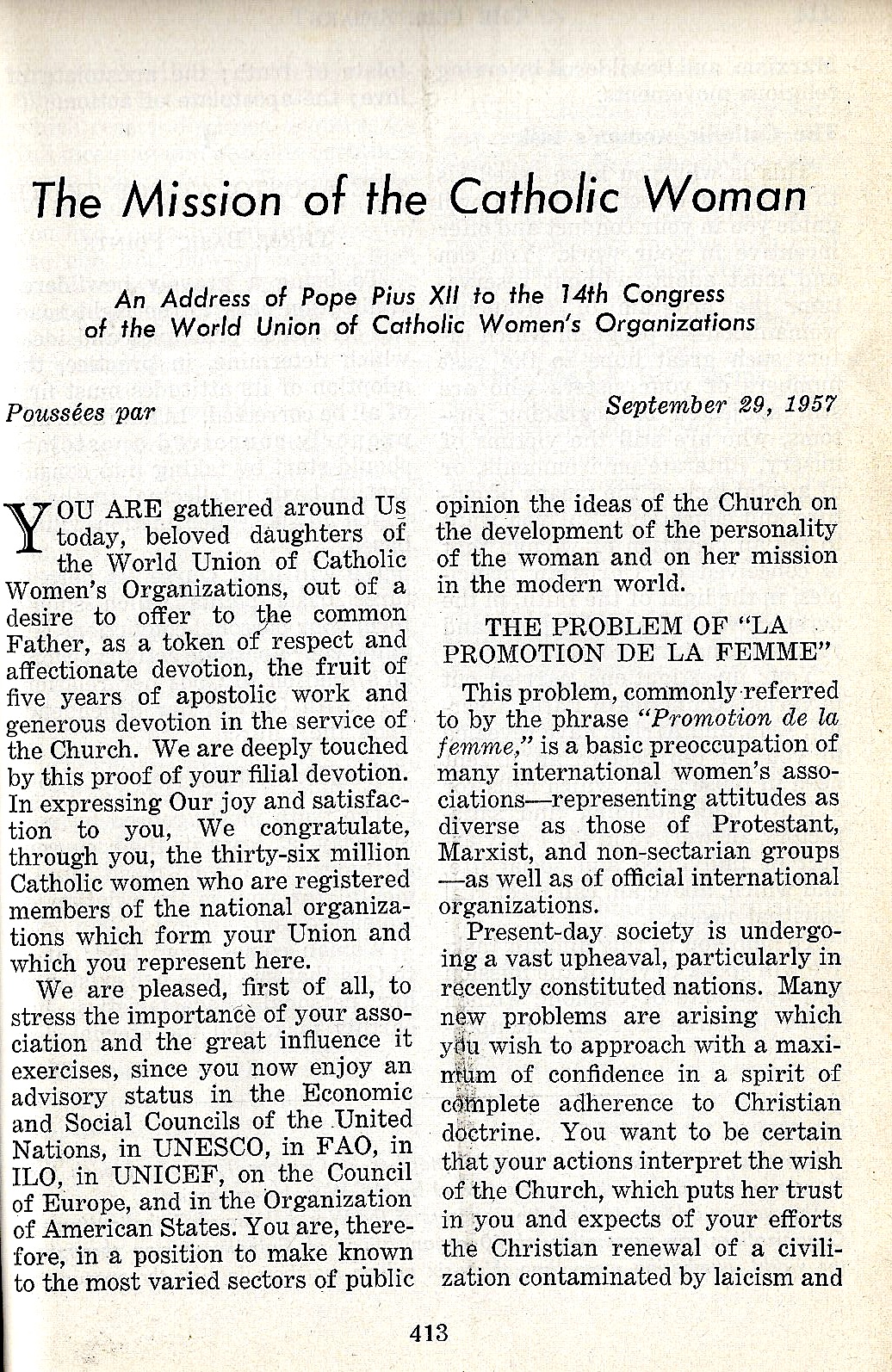 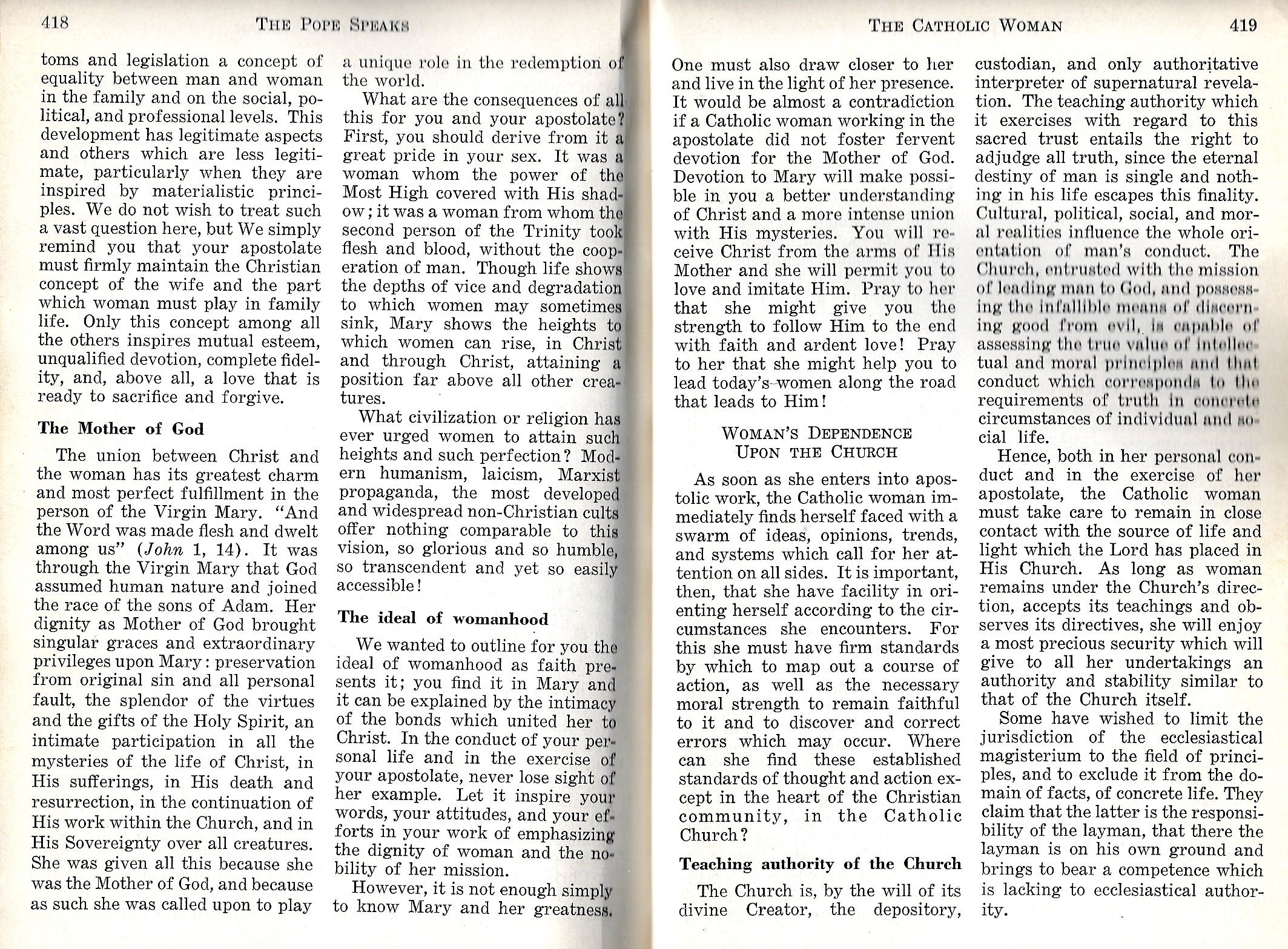 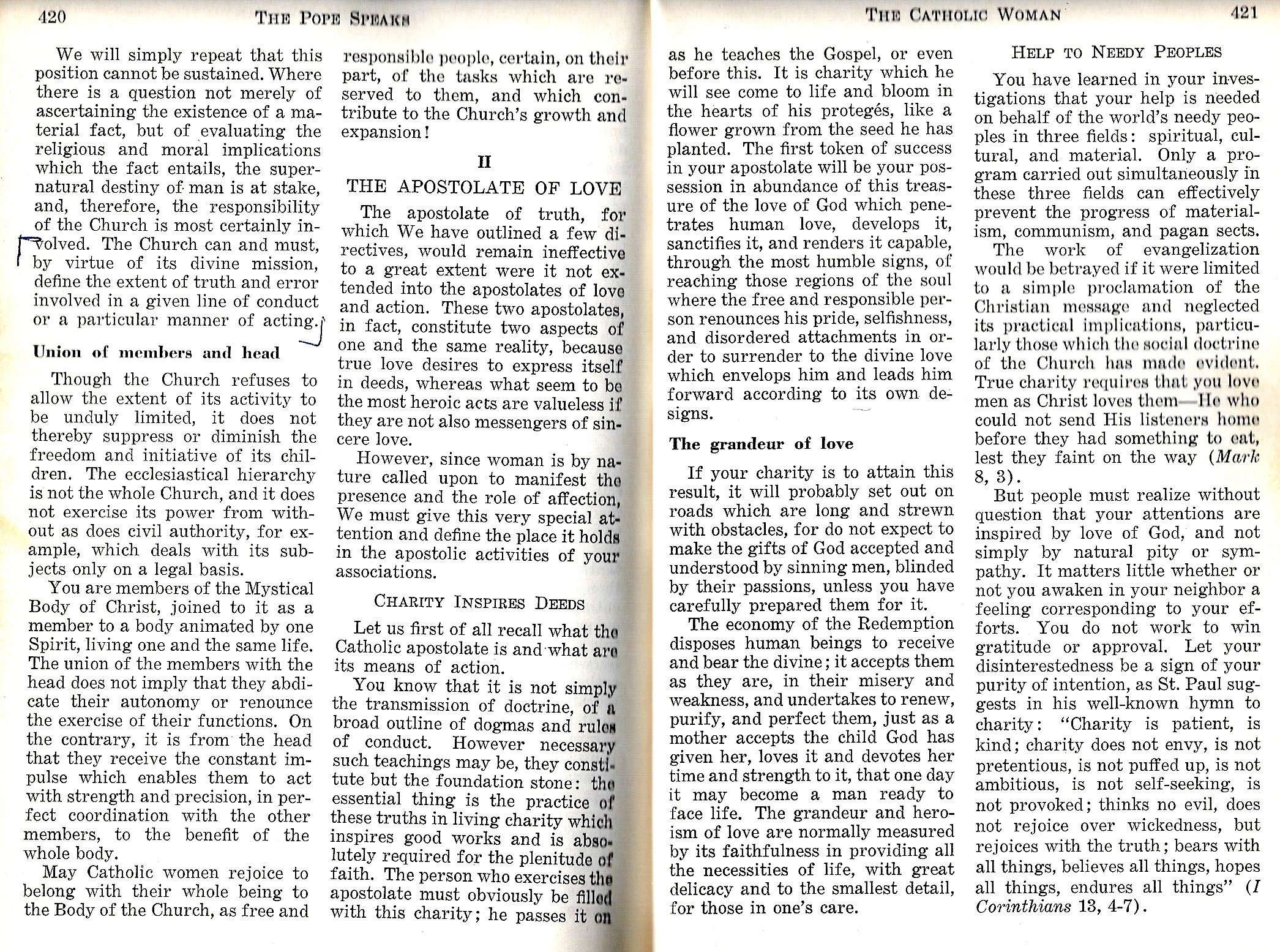 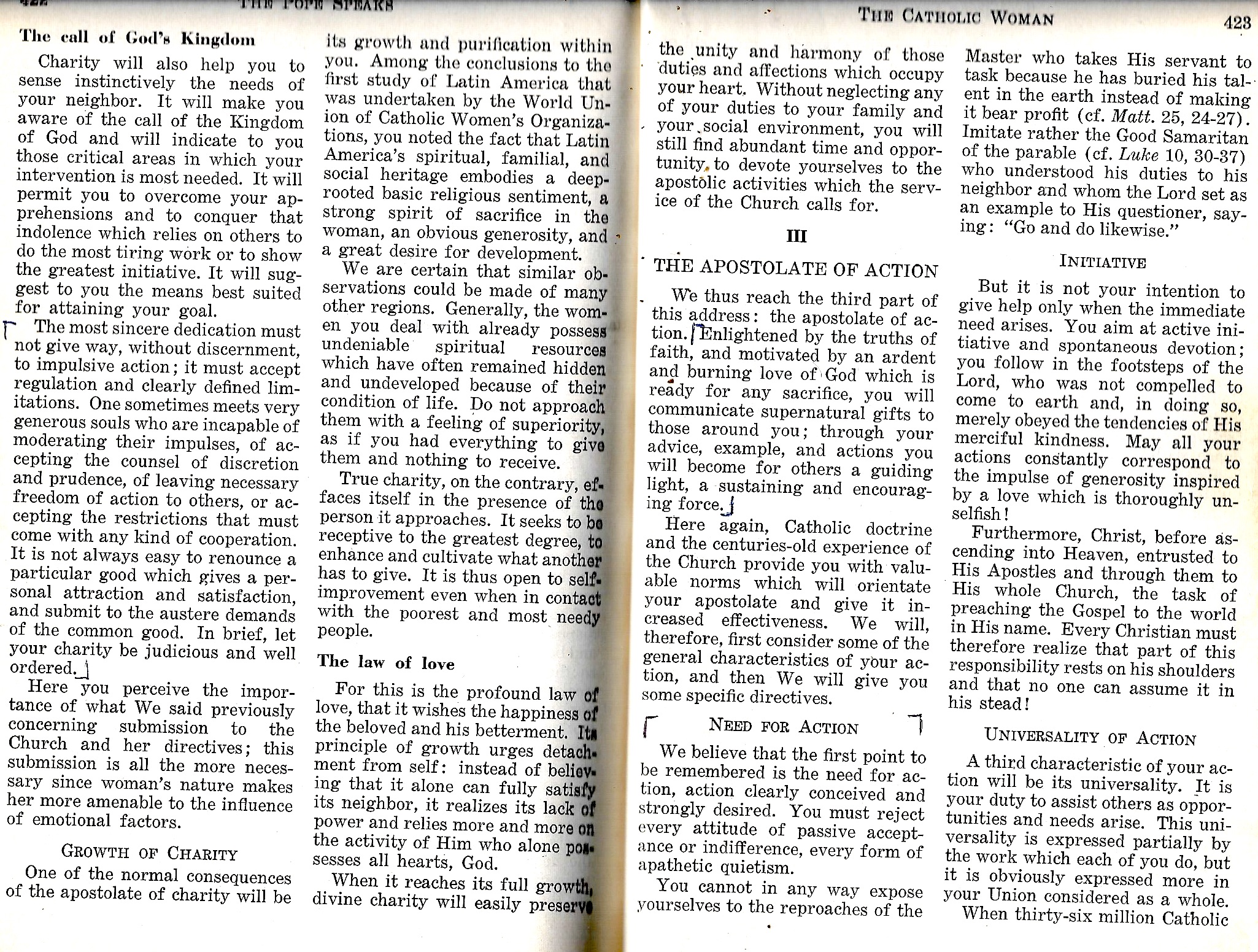 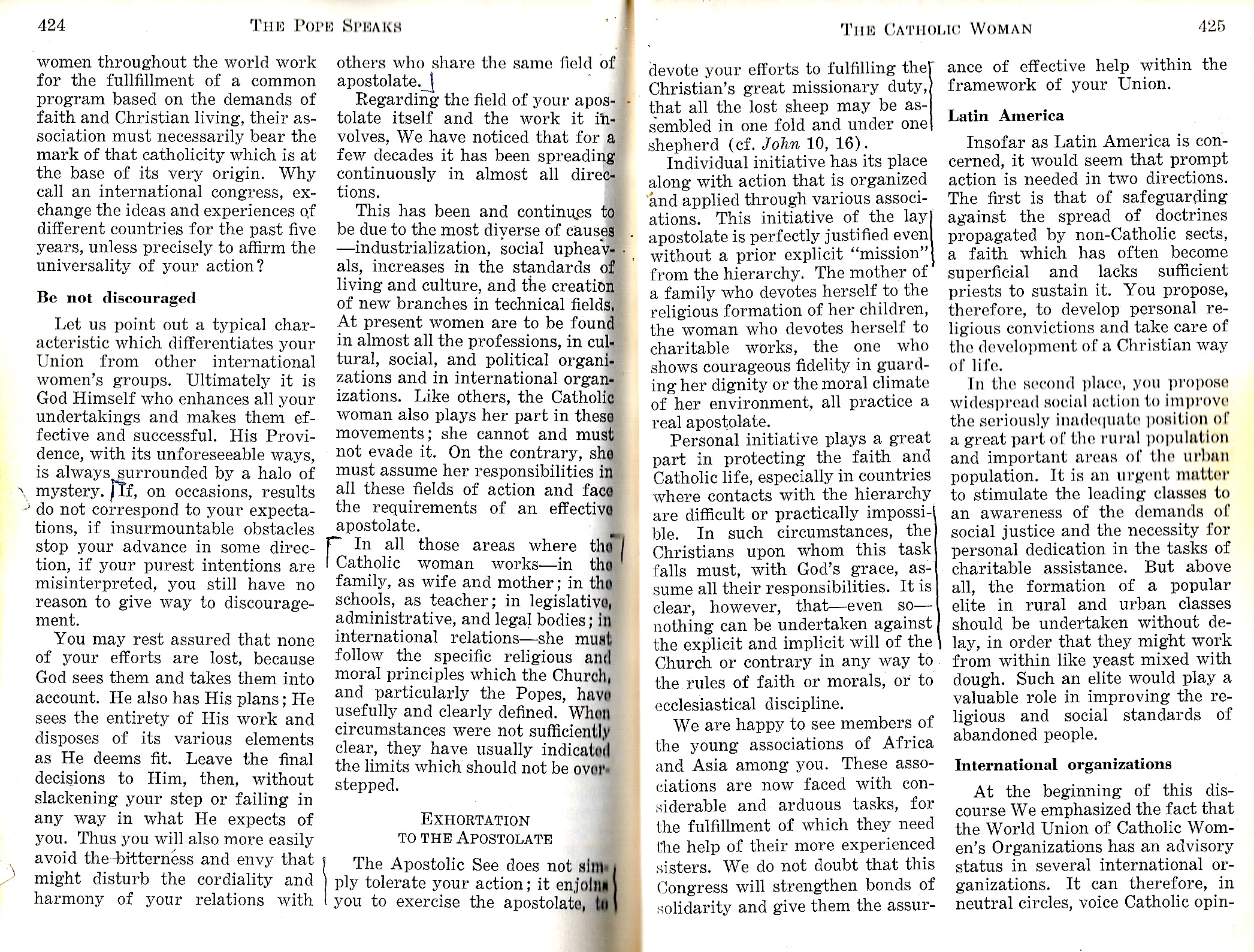 In commenting on these papal addresses, other accusations by the misogyny set in Traddie land should also be dealt with.

First of all, regarding the charge against a lack of charity where Traditionalists are concerned, notice that Pope Pius XII identifies truth as the ultimate charity, and the truths presented on this site are not our own but come from approved Catholic authors, something so-called Traditionalist clergy definitely are not. Yet the one and most important truth — the truth on which all that is written here hinges — is never so much as mentioned by Traditionalists. That truth is the unanimous teaching of theologians, which Pope Pius XII and other pontiffs have endorsed as binding in conscience, that none of the Sacraments are ever to be administered where doubt of their validity has been established. And such doubts, issuing from the Roman Pontiffs themselves throughout the centuries, have been publicly presented by this author for over 30 years.

Secondly, in castigating this writer for the use of the work The Communication of Catholics with Schismatics by Rev. Ignatius Szal, (Catholic University of America canon law dissertation, 1948), some very important points are omitted. The decisions rendered by the offices of the Holy See, Congregations and popes Szal quotes in his work are not taken as a whole, nor are his conclusions referenced by the castigator. Any Catholic may receive Penance and Extreme Unction form the hands of a validly ordained priest in danger of death, but such few priests remain it is not even worth discussing. And even if this were the case, the teaching of the Church on this matter presumes the Roman Pontiff would supply the needed jurisdiction and this is now impossible. Both Szal and Bancroft (see https://www.betrayedcatholics.com/free-content/reference-links/7-recent-articles/revisiting-communicatio-in-sacris/) agree that even were there a Roman Pontiff to supply, it would be best to forego these ministrations out of respect for the Sacrament. But who considers this? It is all me, me, me and my needs, not reverence for Christ-instituted Sacraments — at the hour of death no less!

Szal wrote before the issuance of Pope Pius XII’s Vacantis Apostolicae Sedis, a mere reorganization and reiteration, with a few additions, of Pope St. Pius X’s previous papal election law. Invoking his supreme authority as Roman Pontiff, Pius XII forbids the violation of any papal laws during an interregnum, and should they be so violated he declares the attempted acts null and void. Again, there is no mention by Traditionalists, not even a whisper, of this binding papal law. For they know full well it leaves them dead in the water, without even a shred of hope that their operations could ever be considered valid, far less licit. So many papal laws have been violated by Traditionalists it defies the imagination.

And as for Ngo dinh Thuc, the omissions and errors they claim have been made in his case are irrelevant minutiae based on assumptions. They are meant to deflect from the real issue here — Thuc’s actions during an interregnum were rendered null and void by Pope Pius XII and his own defection form the faith; end of story. And to the complaint that these articles are too long — get over it. One either wants to learn the truth or not; it cannot be encapsulated in tiny little bites of info intended for children. Encyclicals and addresses by the popes are much longer than most of the articles here and are liberally quoted on this site. In the day, Catholics were expected to read and study them. Think of the size of the Summa and many other doctrinal works by saints and theologians. I suppose they are not worthy of any study or consideration, either.

And so, getting back to Pope Pius XII’s address posted above, we see that:

Hmmmm… Let me see. The pope tells me to exercise this apostolate. Forget that I am a miserable sinner; so was St. Mary Magdalene, St. Augustine, St. Margaret of Cortona, and hundreds of other saints. He advises me that I have a great missionary duty to reclaim the lost sheep. He states that I do not need any permission from ecclesiastical authority to do this, and that such initiative is not only justified but necessary to protect Catholic life and faith. Moreover, when contact with the hierarchy is virtually impossible as it is in our situation, I am not only allowed but commanded to take on the responsibilities of the hierarchy insofar as the law and Church teaching allows.

Now the Church’s will is expressed in Her ecumenical councils and the decisions of the popes and the Sacred Congregations. These teachings clearly state that no Catholic is to receive the Sacraments from the hands of a schismatic, regardless of the circumstances. In a case of doubt, (Can. 15 — ecclesiastical discipline), a doubtful Sacrament is no Sacrament according to the canonists Woywod-Smith (also others) and must be avoided. Moral theologians teach the same regarding the Sacraments (Prummer, McHugh and Callan, others), as pointed out in earlier blog posts. During an interregnum, none of the laws made by the popes can be violated, and if they are, those actions are null and void. This is not to mention that without the Pope there is no Church and no Catholic society, as Pope Pius IX teaches. The Church has never forbidden Catholics to stay at home and practice their faith in the absence of the hierarchy, and this is proven by Pope Pius XII’s words above.

Women are not excluded from fulfilling their duties imposed by the popes; Pope Pius XII makes this clear. All the accusations regarding stay-at-home Catholics acting as mini-popes fall to the ground when what Pope Pius XII teaches illustrates they are only following papal directives. Those who hang on the words of these Traditionalists, who are truly the ones assuming the role of mini-popes, never examine the proofs presented here from the Roman Pontiffs, the Ecumenical Councils and approved theologians. Nor do they demand any proofs from those they cozy up to. All is feel good and me, me, me in Traddie land just the way they like it. Uncharitable? Not according to Rev. Felix Sarda-Salvany in his Liberalism is a Sin. He eloquently states,

“The good of all good is the divine good, just as God is for all men the neighbor of neighbors… the love due to a man ought always to be subordinated to that due… to Our Lord. The degree of our offense towards men can only be measured by the degree of our obligation to Him… Therefore to offend our neighbor for the love of God is a true act of charity. Not to offend our neighbor for the love of God is a sin.” And so Rev. Sarda explains that the great saints and Church Fathers did not hesitate to use imprecations, execrations, irony and colorful language to crush the heretics they opposed. And if our neighbor is displeased, outraged, humiliated or even if some material injury comes to him, if it is truly in the service of God, to protect others from dangers against faith or for the neighbor’s own good, then it is not an option but an obligation. “When we correct the wicked by punishing or restraining him, nonetheless do we love them. This is charity and perfect charity.”

Persecution is the fifth mark of the Church. Let the heathen rage and press forward.