Many have asked what I now recommend concerning my previous statement of the case for a papal election presented in the work I (primarily) wrote in 1989: Will the Catholic Church Survive the Twentiethth Century?” Obviously I no longer believe that a true pope can be elected in the present circumstances, seeing that no certainly valid members of the hierarchy currently are available. At that time, however, I fervently believed that the Church could not exist without a Pope and that in light of the defection of the Cardinals, even the laity could elect a layman as Pope. Needless to say, continued study and more mature years have put a different light on the matter, just as it also did for St. Augustine, St. Thomas Aquinas and St. Alphonsus Liguori. These men did not hesitate to change their teachings to reflect the fact that new evidence had come to light which caused them to change their minds.

For many years I believed that a conflict of law (allowing only cardinals to elect a member of the hierarchy pope) could be resolved in favor of the common good to promote unity among the faithful, thus resolving the crisis in the Church. But neither unity nor the common good is ever served when a man not possessing apostolicity claims to be fit for the priesthood, far less the papacy. No one can, in good conscience, recognize such a one as a true successor of the Apostles. Many pre-election did object that a layman could not be elected despite Pope Pius XII’s teaching in Six ans se sont that this as possible; they refused, however to demonstrate why. Today, we know what they meant, yet failed to explain; but then hindsight is always 20/20.

While Will the Catholic Church Survive…? is definitely flawed in its conclusions, this does not necessarily affect the truth of what is generally presented in the many sections of the book I personally authored. This is especially true because so much of what was presented came directly from the works of others writing with Church approval prior to 1959. Their works and statements cannot be discredited simply because they were (unknowingly) used to arrive at a wrong solution to a very difficult problem. The different terms of a syllogism can be correct, while the conclusion of the syllogism is false. It seems the book fell on the sword of what is called the “fallacy of the complex question” in the study of formal logic, used by scholastics.

It is important to understand that the laity has never elected popes (they have only nominated or acclaimed them) far less nominated a layman as pope in the absence of any hierarchy to ordain or consecrate the one elected. Therefore no pope was ever lacking the official confirmation of the hierarchy, no matter how irregular an election might have been. Unfortunately this clear fact was never addressed or explored in the book as it should have been. In fact the research for that section of the book was not conducted in proper fashion and the rules of scholastic process were not followed. Other theological errors in thinking also occurred and these errors have been addressed and corrected in articles appearing on my website over the past two years. For a summary of the truths which refute these errors, see No Apostolic Succession, No Pope in the section

When I tell people not to read the book, even though I believe that the Church teaching and laws in the book, taken by themselves, are still true, I am doing what the Church has always done. When she condemns a book, She doesn’t say: “Just read these parts and ignore the rest.” Instead, She condemns the whole book. Am I usurping the rights of the Church to condemn books as dangerous and forbidden? No; I am only exercising my obligation as a Catholic to denounce error wherever I find it. And I have every right to cite the constant practice of the Church concerning the case of dangerous books.

THEREFORE, AS THE PRIMARY AUTHOR OF THIS BOOK, NOTHING MAY BE QUOTED IN MY NAME FROM “Will the Catholic Church Survive…?,” UNLESS SUCH QUOTES ARE MADE ONLY WITH MY EXPRESS AND PRIOR WRITTEN PERMISSION AND KNOWLEDGE. From a both a legal standpoint and as a matter of faith, sincere Catholics are bound to honor this request. 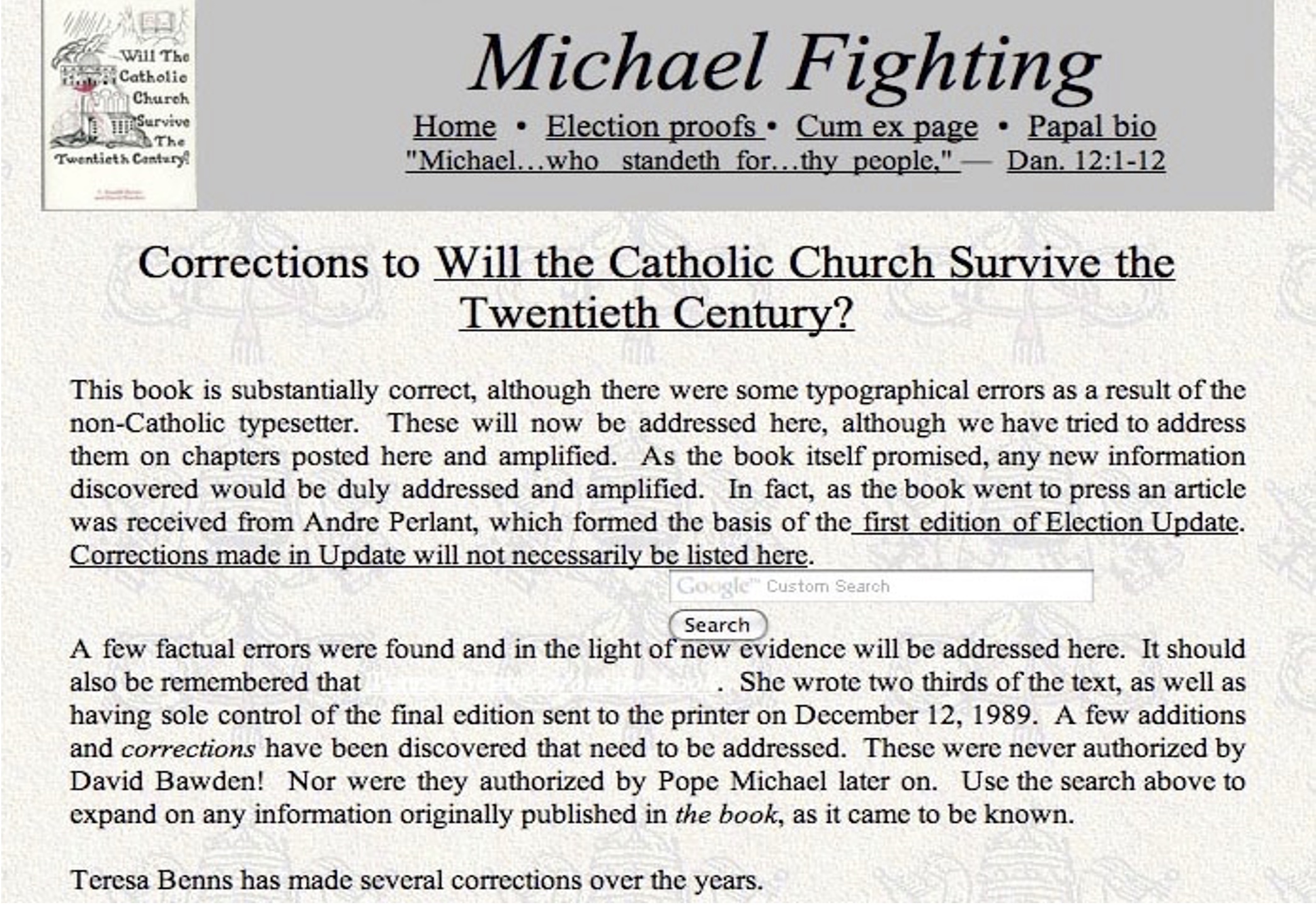 (The only corrections made by Teresa Benns were the amendment of errors, both in Canon Law and in Church teaching and history — errors made by David Bawden.)

The excerpt below is from David Bawden’s biography of Teresa Benns, written before the 1990 “election.” It shows what sections of the book were written by each author. Bawden’s group currently continues to circulate a revised copy of the book never approved by Benns and which should not in any way be considered as a true representation or interpretation of what was originally written.

Bawden’s parents financed the publishing of the book which has continued to sell for over 30 years. For this reason they claimed the right to all proceeds until their investment was satisfied, but there was no way of knowing when or if this ever occurred. With only a few exceptions, Benns has never received any of the funds generated by these sales, nor remuneration in any other manner.