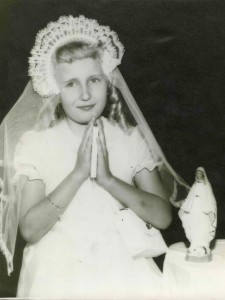 Who is Teresa Stanfill Benns?

Articles by Teresa Stanfill Benns — a wife, a mother and a Catholic researcher and writer — began appearing regularly in Traditional Catholic publications beginning in 1979. A cradle Catholic, Benns attended Catholic schools into the early 1960s.

She credits the tutelage of her father, magazine editor and public relations consultant William E. Stanfill, also her Catholic grade school education by the Sisters of St. Joseph for providing her with the basic skills she needs to write and research her articles.

Benns has reported for community newspapers since 1993 and has received many awards from the Colorado Press Association (CPA) for her work. In 2011, she and her editor received the prestigious Service to the First (Amendment) award for championing freedom of the press after CPA attorneys filed and won an open meetings lawsuit against county commissioners, based on Benns’ articles and research.

On Oct. 11, 2014, Benns won the Jean Otto Friend of Freedom Award from the Colorado Freedom of Information Coalition, given to only a handful of reporters/newspapers over the past two decades. (http://coloradofoic.org/award-winning-reporter-benns-cranks-story-story-citizens-deserve-better/ ; http://coloradofoic.org/cfoic-honor-center-post-dispatch-reporter-teresa-benns/ The Catholic Faith is a precious thing and the truths of faith must be handled with great care. Credibility matters.

Writing is a discipline that requires oversight and accountability on the part of the one writing when it is done in way of a profession. How many Traditionalists are trained in the art of research and writing? How many of these have worked at it as a career and won awards? Those reading what is posted to this site deserve to know that at least the person posting these articles has been properly trained to write them.

In her newspaper work, Benns focuses on defending the constitutional rights on which this country was founded and the free exercise of these rights on a community level. She believes it is her duty as a Catholic to defend these rights in the battle against the elements of Socialism and Communism now threatening America’s existence, in order to preserve what religious freedoms remain.

“The popes, from Leo XIII on, criticized the rampant materialism and secularism in America and warned that Democracy, taken to its political limits is dangerous,” Benns noted. “Nevertheless, they appreciated the fact that even though there were abuses, we still had the right to practice our faith here undisturbed. It is up to real Catholics to defend this right at all costs, or resign themselves to the spiritual and intellectual slavery that follows.”